They're changing the guard at  Buckingham Palace


~ Christopher Robin in A.A. Milne's
When We Were Very Young

Well, they've changed owners at Eagle Harbor Books, and it's been nearly a year with our new owners, Jane and Dave Danielson, in place.  While it's true that no one here has been clicking his heels or wearing a busby, changes have been made, and we who work here are used to changes.  But what about the new owners?
Jane, one half of the new ownership, is an old hand at things around here, so we don't need to clue her in on the routine.

Dave, however, is new at this bookstore thing and he'll have to be taught about the quirks of bookselling. 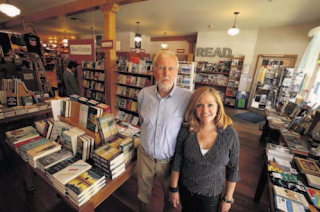 For one thing, he'll need to understand that grandparents are understandably proud of their progeny.  So, no self-respecting grandmother will ever announce "Henrietta reads way below grade level."  In fact, given the chance, as Dave will find out, he'll have a beaming customer should he suggest War and Peace for a ten-year-old.

After he's been here a while, Dave will discover that the ten minutes before closing is a dangerous time.  There's a lot of fine dining available on Winslow Way, and when one is out for an epicurean evening, one's dinner reservations are rarely for 5:30 or 6:00.  Where to pass the time while waiting?  "How about the bookstore? The lights are on there."  We will try and be patient as we teach Dave the gentle art of helping browsers out the door.

Down in the Used Book Annex, Dave will also need to brush up on a couple of things.  First, he'll need to memorize the variation on Murphy's Law which states "Those who are moving, are cleaning out the garage, or are just sick of all the mess in the kid's room will never remember to bring only one bag of used books in to sell."  Dave needs to know it's not nice to sigh or roll one's eyes in such a situation.

In time, we hope to be able to teach Dave all these and numerous other rules.  And then he'll be seasoned and, paraphrasing Christopher Robin, he will say, "A bookstore owner's life is terrible hard."
~ Ann
5 comments: